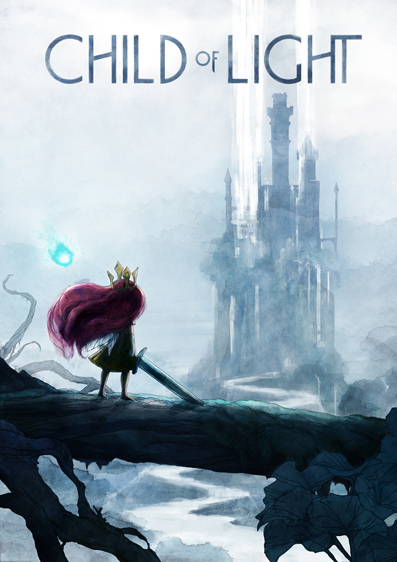 Released across multiple platforms in 2014 by Ubisoft, Child of Light is a beautiful combination of a 2-D platformer and RPG rolled into one. It follows the story of Princess Aurora, who is mysteriously kidnapped away from her family in the middle of the night.

Mindy’s Thoughts: We begin with Aurora, a girl from 1800’s Austria, who wakes up in Lemuria. Lemuria is a mythical land ruled by the Dark Queen, who has stolen the sun, moon, and stars from the world. Aurora is told if she manages to recapture the celestial bodies, she can go home to her family and most importantly, her beloved father the Duke. We spend the rest of the game exploring Lemuria and all its different areas and inhabitants.

On a high level, Child of Light is a side-scrolling, 2-D platformer with RPG elements. Throughout the game you gain interesting new allies that will join your party, some that specialize in certain things (white/black magic, physical attacks, healing, etc). There is a leveling system for each character, with a talent tree that allows you to personalize everyone to your preferred play style. You gain experience and items by doing battles with monsters, like your average RPG.

High level aside, the most stunning thing about Child of Light is the art style. Playing through this game feels like playing a beautiful, living, watercolor painting. The game is constantly moving, the trees, the air, monsters, even Aurora’s hair and dress are constantly fluttering in the breeze. I wish I could include a hundred more photos of the background landscape for this review, because I feel that it is such a strong selling point on it’s own, but you can just take my word for it. The art director, Thomas Rollus, stated in an interview about the game, “we really put forward the watercolor effect. We wanted to give the impression of being awake in an underwater dream.” It worked, Thomas!
If you upgrade to the deluxe version of the game it comes with a 24-page art book as an accompaniment, because the art is so distinctive and beautiful. The deluxe version also comes with a poster and a keychain; full disclosure, I did not get the deluxe edition.

Child of Light’s battle sequences having a learning curve to them, but as you learn, they become easier. This is not a game that will have you grinding levels all day long, your battle interactions are pretty sparse unless you go looking for a fight. The basic idea is that two people within your party fight 1-3 monsters in each battle. Most of the monsters are pretty nasty and have specific ways they prefer to be attacked. Attack a magic monster with their elemental magic type and at best you will only hit them for a few points, at worst they could counterattack and kill you. Most physical monsters have some kind of counterattack as well.
The game also includes an active battle timer, which you can influence with spells and Igniculus. Learning how to properly use this timer system is the most crucial part of battle engagements within Child of Light. While in battles you will need to control Igniculus plus your one or two other characters (that can be switched out mid-battle), all at the same time, so get ready to multi-task!

A second local player can co-op play Igniculus while you run around as Aurora. This might seem like a throwaway mechanic at first glance, because why not allow co-op play as a different character instead? However, I think that Ubisoft took a chance with incorporating Igniculus as a fun and important part of the game. Even during solo play, you use him constantly, to slow down monsters, to light up dark pathways, to solve puzzles, etc. I played a short amount of time with another player as my Igniculus and the reaction was mixed. The game pacing seems non-ideal for most kids (or adults with a limited attention span) as it involves some coordination between players.

Like any good platformer/RPG game, Child of Light has puzzles incorporated into the game at certain points. These puzzles are challenging, but not impossible. In my experience, it was fairly easy to figure out what they wanted me to do, but sometimes challenging to get that accomplished. One of my favorites is in the below screenshot, where you are lining up colored gems with Igniculus as the light source. I really enjoyed the puzzles and thought they added a thoughtful touch to the game. 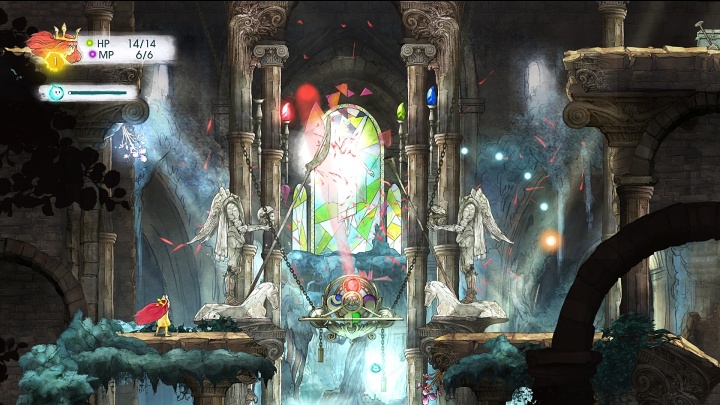 Despite being a shorter game, Child of Light really packs in a condensed story, full of very vivid images, characters, and emotions. I don’t want to get too far into the story as it could spoil it for some, but I’ll say that there were a few times where I was genuinely happy/sad/angry/elated by events in the story line. It manages to draw you in, especially if you had/have a close relationship with your father. Child of Light is a fairytale, and as such the story gave me flashes of other fairy tales like The Little Mermaid and Cinderella. Hey, don’t act like I’m the only one that ever cried to The Little Mermaid because Ariel had to leave King Triton at the end!

Overall, Child of Light is a very fun, unique, gorgeous, and heart felt game. I was not happy when I finished the game, not because it wasn’t enjoyable, but because it was over and I wanted to keep playing in the world of Lemuria. My only actual complaint with the game is that it isn’t full length (I clocked about 20 hours of play time), but Ubisoft is aware of that and it is priced to reflect the shorter game time (when I purchased it, it was ~$20 from the Xbox store, versus $60 for a full title release). Unfortunately Child of Light doesn’t have a lot of replay value but it’s possible that we may see a sequel, eventually. However, if you are interested in beautiful imagery and side scrolling RPG type games, you need to play Child of Light. You will not regret it!