While in the finishing stages of Castle West I started scouting locations for my next build, and didn’t need to travel very far before I found the chunk of mountain pictured above. Lava flows, connecting bits between spires, waterfalls, it was perfect.

I went to work on the bridges first and let them shape the building of the castle. The top tier bridge you can see barely changed from the raw to finished versions (above and below), while I added a middle tier bridge and a bridge/entrance to the main floor. 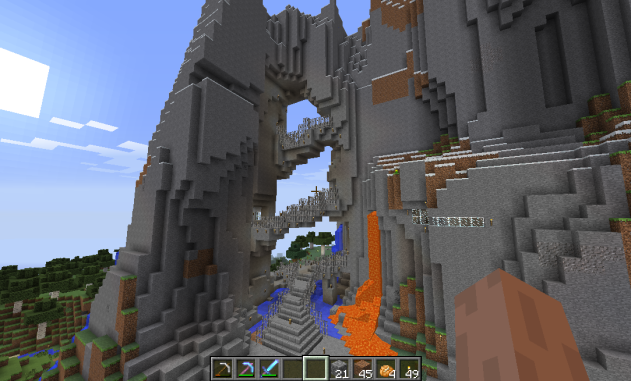 The ground level bridge actually extends backwards so you can approach it from either direction (pictured below). Once the bridges were in place I started carving out the insides; a process that included many, many revisions and a lot of time. In the end, I carved three floors out of the western spire of Castle East and two floors carved out of the eastern spire.

Below is the grand entrance to Castle East; this is on the ground floor and is the only direct entrance to the castle, so I spent a lot of time tweaking it to perfection. In the picture below you can see a doorway (with torches surrounding it), which is a secret passage into the stables and village area. If you go up the stairs (on the right) you will gain access to the bedrooms (see the glass windows in the above few pictures? Those are bedrooms!) and throne room. Behind the central pillar is a ladder to the second and third floors, as well as the rail hub leading to Castle West.

Specifically for the decoration and lighting of Castle East I used a lot of lava; you can see here that it is behind colored glass and acts as my main light source throughout the castle. 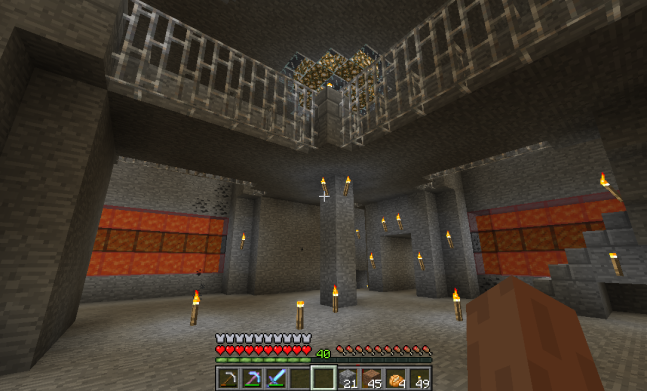 Up the stairs into the throne room, I love this room! I went a little crazy with it, but it’s Minecraft, so why not? The “throne” itself is made of various cuts of quartz, the floor tiles are carpet/wool, and again I have lava lighting throughout — though each room had a different pattern for the stained glass.

Floors two and three were mainly built out into giant storage hubs for my entire world. All materials from previous locations were painstakingly transported through nether rail and regular rail hubs to the central storage here. I also included an indoor food garden, utility blocks, and more lava lighting on the second floor (below).

On floor three you can see more storage, utility blocks, the alchemy sets and even a small plot for netherwart to grow. If you look closely at the “back” of the picture (central) you can see additional lava lighting and the doorway to top bridge. The tube of lava lighting went through both floors two and three, very cool.

I unfortunately do not have many pictures of the East spire, but I do have one from before anything was built there, taken by a friend on the server (below). I included different kinds of stained glass, giant lava flows that were used for lighting, and several entirely glass/lava floors. This was also the area I ended up using for a library/enchanting table.

That is all for this entry; I hope you enjoyed my walkthrough of Castle East. Leave a comment and let me know what you’ve been building lately!

One thought on “Minecraft: Castle East”