Dixon’s Thoughts: I wasn’t quite sure what to expect from the Evolve beta. While Turtle Rock’s bread and butter has been online, class based, level-up shooters such as Countersrike and Left 4 Dead, I didn’t really know how they’d pull off a sci-fi shooter. After dealing with the recent letdown of Destiny, I was pleasantly surprised to find a very accessible, fun-to-play game that was as engaging as it was rewarding. Fans of past Turtle Rock productions won’t be disappointed, but there isn’t a lot of new ground broken with the basics of Evolve. You play a character, leveling it up as you gain experience and unlocking variants of whatever class you are currently sinking time into. The beauty of Evolve lies in it’s inherent, natural feeling teamwork aspect. Evolve is a primarily online-only game, much like Plants vs Zombies: Garden Warfare. There are 4 Hunter Types available to players, Assault, Medic, Trapper, and Support. In any match, all 4 character classes are required. 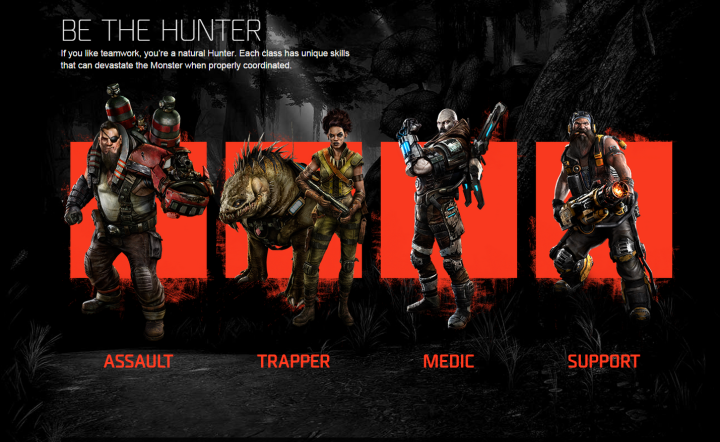 The four of you must work together in what is essentially a giant battle arena to track the fifth player, the Monster. The online matchmaking interface focuses on your preference of Hunter or Monster, and which Hunter class you wanted to be. To find a game, you would list your preferences in a 5 item, first-to-last list. The game then attempts to find 4 other people who’s preferences allow you to play your preferred class choices. In about 50 matches or so, I almost always got my first 2 choices right away.

The dynamic between each class is pretty important to the gameplay of Evolve. Each class has a very unique and diverse set of abilities. The medic, for instance, has a healing “gun”, as well as an oh-shit AOE heal. Additionally, it’s given a long-range sniper rifle that punches holes in the Monster’s armor, giving the rest of the team a huge advantage over an otherwise very difficult enemy.

His other weaknesses involve invisible pizzas and speaking in public. RAWWWWWWR!!

Despite the cool teamwork aspect, there isn’t really much that’s groundbreaking about the classes that I was able to play. The Assault class…assaults things, meaning you get TWO guns that can dish out damage to the Monster class, as well as an AOE invulnerability ability. Support class is actually my personal favorite, as it’s a hybrid DPS and buff class that can shield other players from damage. The Tracker is the game’s most unique class. It’s primary role is to track down the monster in the huge battle arena, which is done through an amazingly adorable hunting “dog” pet. Each Trapper variant has a different pet, but they all serve the same purpose, which is allowing the team to actually find the Monster.

While every class is different, they all play relatively in the same manner. Each class has a primary attack/function, as well as a secondary attack or utility ability, and a longer cooldown button that either dishes out damage or prevents it from happening. Playing the monster, on the other hand, is completely (and refreshingly) different. When you play as the monster, your primary goal is to stay undetected long enough to eat as much wildlife as possible and to evolve to the highest level possible. Doing so gives you massive upgrades to your health, strength, and abilities, and makes you much harder to kill. The monster class itself had 2 variants in the Beta, the Goliath and Kraken. The Goliath was a land-based, lumbering hulk who grew to fantastic proportions. A sort of King Kong/Godzilla hybrid, his main attacks were jumping on people’s faces, throwing huge rocks, and breathing fire on people.

I didn’t get the chance to play the Kraken, but I did play several matches against it and it was kind of insanely terrifying. It was a lot like being assaulted by a flying, electrically based squid demon, but with more shrieking directly from the seventh level of the underabyss. 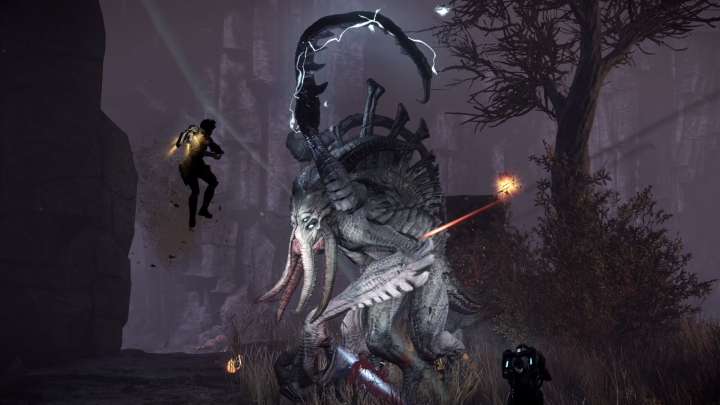 “Horrifying electrical sea nightmare that haunts your dreams” was just one of it’s rejected names.

The Beta allowed us to play 2 kinds of games. The first type was a single-game type campaign in which the 4 hunters fought against a single Monster in a one-shot game. At the end the player’s preferences can be adjusted, and a new arena/match area can be selected along with your own character customization. While players wait in the lobby, a top-down battle map displays a sped-up display of the battle that you just finished, complete with deaths and beast movements. It’s fun to watch, but also allows you to observe your opponent’s strategies as they move across the map. Clever players will note other player’s patterns and adapt.

The other game mode was a 5-game mini-story. Here, the hunters play 5 successive rounds on various map spawns against both the Player Monster and a small horde of mini-monsters, and are aided by several environmental bonuses such as automated turrets, extra NPC hunters, and drones. In this mode, winning or losing changes the next match. For instance if the hunters win a match, they might get a bonus to all of the NPC drone or Turret damage, or a 5th hunter player. If the hunters lose, however, the Monster gets dangerous bonuses to strength and damage, or an even larger horde of NPC monsters, along with other map-based bonuses. It’s a high-stakes game that spans a long period of time and is a lot more engaging than the single shot missions. I found that having 2 very different game modes, on top of the ability to play as the Monster or one of several hunter classes results in a game with a lot of replay value. We put together a short set of class-specific playlists that highlight some of the basics of each class. Unfortunately, the Monster footage was lost, but there are dozens of gameplay videos at this point and if you’re really interested, you’ll find them.

Graphically, the game was very enjoyable, with a large variety of alien environments and arenas. The game definitely has it’s own style and aesthetic, which I would place somewhere between Borderlands and Destiny. In a lot of ways, this game IS what Destiny should have been. It has an easy party system, and while it does have quite a few loading screens, they never feel boring or forced. Instead of looking at space ships fly endlessly into night, you’re presented with instant replay maps, short dialogue cut-scenes, and hint screens that are actually useful.

This game has a lot of promise and I personally enjoyed every second of it. There is a tendency for the cut scenes to be repetitive in the single-game mode, and sometimes there is so much going on in such a small area that playing strategically, otherwise required for success in Evolve, is almost fucking impossible. Aside from those minor setbacks, the game is a lot of fun to play. I’m looking forward to playing the full version, which will probably be reviewed here as well. If you’re looking for a solid, class-based shooter that offers short OR medium-to-long style matches, blended PVE and PVP, and a rewarding skill curve, this might be the game for you. Don’t come looking for a well-written story, or much in-depth character development. This game is clearly about shooting your friends in the face or eating them to death, and in that respect it delivers.