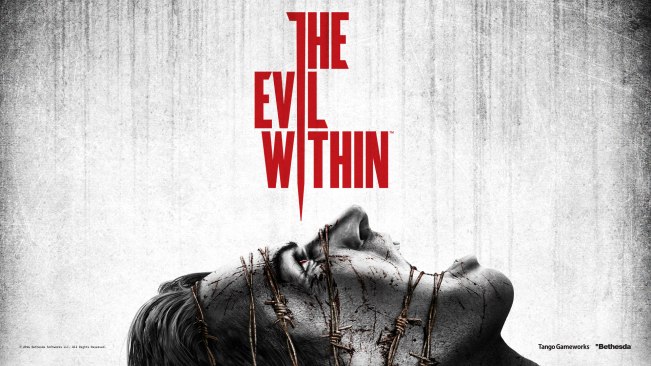 Survival horror is a surprisingly difficult genre to get people to agree upon. The Evil Within’s director, Shinji Mikami, is one of the most influential figures in the genre. Responsible for a number of the best titles in the entire genre, including most of the Resident Evil series, he’s helped both establish and redefine the genre. With The Evil Within, he’s created a dark, lonely adventure through a foreboding world, and whether or not you end up finishing it or enjoying it, one thing is certain; you will absolutely remember this game.

Rating: 3.5 out of 5 Screaming Zombie Faces!

I’m a system of measurement!

Dixon’s Thoughts: Some of the more subtle aspects of past survival horror titles have been their mechanics. Aside from spooky-scary atmosphere and a decent story, survival horror games tend to play in similar ways. The Evil Within certainly feels similar to past titles in a lot of ways, and this is to be commended. First and foremost, it’s difficult to call any game without a save-point system a true survival horror title. The Evil Within takes this a bit further, and links all save points to a centralized hub populated by a lone woman who speaks in cryptic riddles and is generally completely fucking useless aside from helping you level up. If this sounds familiar, it’s because that is exactly how Demons’ Souls works. Character customization takes the form of The Upgrade Chair, where you spend Green Goo, a mysterious fluid that is never explained. You spend this goo on different upgrades to yourself, weapons, and inventory. You won’t have enough green goo to upgrade everything you like, so I advise that you do some research before dumping a large amount of Goo on any one thing. This upgrade system defines how the gameplay experience will be for you, especially seeing as some of the weapon upgrades can add new effects to the weapon.

The Evil Within upgrade menu

My advice to people with shaky hands or bad reflexes is to invest heavily in your inventory carry capacity, as this game does a very good job of ammo-starving you. This is unfortunately accomplished in a way that I don’t think has a place in survival horror, and that is the bullet-sponge method. The game is very, very predictable in this regard. If you start picking up ammo all over the place, prepare to get into a fight. In some select areas, you will have the option to stealth around the enemies, but more often than not there is no other choice than to shoot your way through a wall of enemies. This in turn is largely due to rather poor stealth mechanics in general. While games like The Last of Us (TLoU) have complex sneak systems that require practice and decision making, The Evil Within’s systems is entirely binary. An enemy won’t see you if you’re hidden, and sneaking under a window, but “sneaking” doesn’t actually prevent them from seeing you if you are say, hidden entirely in the shadows 30 feet away. The end result is that you often just have to pony up the stash of bullets you’ve been saving and hope that you have enough to get through the shufflers.

Speaking of shufflers, one of the strange thing about this game is its lack of enemy types. Without spoiling any of the plot points (spoilers reserved for Part 2 of this review), you really only ever encounter a few different enemy types in the majority of the game. Occasionally you DO fight something different, but then the odds are you’ll never see it again and we’re back to the same old guys. For lack of a better word we’ll be calling them zombies, but they’re not really zombies at all. In fact, you never really find out what they are, but for all intents and purposes they’re more or less exactly the zombies from Siren, except not nearly as frightening. Within this category of bad guy, we have the following sub-categories:

The approach to all of these enemies is essentially the same. Shoot out the legs, light them on fire. As long as you make sure there are multiple people touching the guy you just lit on fire, all of the enemies get torched. For their blandness, they’re actually really well designed as monsters. They can carry weapons (including firearms), can both see and hear, and are not very bright. Early on in the game, there are certain areas where they display higher than average intelligence. They will actively hunt for you, and will flock to any odd sound you might make. Want to see if there’s anything in that crate? Go ahead and smash it, but be prepared to run or hide (Spoiler alert: there’s nothing in the crate) because the smart zombies WILL hear it and come looking for you. Later on, this odd intelligence is abandoned in favor of shuffling directly at you and making biting motions.

In the interest of fairness, there are some mechanics that I just never understood until end game. For instance, the game is absolutely lousy with bottles. It’s a good thing that bumping into bottles doesn’t alert zombies to your presence because you can’t take 2 steps without finding a bottle in some levels. In theory you’re supposed to use them to create distractions for zombies to follow while you sneak around or up on them, however, often they would just hear a bottle crash and come looking for you. I later found out that you could just throw bottles at enemies’ heads to blind them, thereby allowing yourself a roughly 4 second window in which you can stealth kill the enemy, saving both bullets and sanity, and getting rid of one of those fucking countless bottles. If you played The Last of Us, you’ll recognize a distinct similarity between the Bottle and TLoU’s infamous Brick.

Overall the mechanics of The Evil Within are solid and the game does a fantastic job of emulating the bullet-starved, anxiety-laden gameplay of it’s predecessors. Shinji Mikami is attempting to once again re-define the genre in a slightly different way, this time by adding a huge emphasis on the first-person shooting element of the gameplay. Whether or not you agree with this decisions will depend entirely on your preference for other survival horror games.

Stay tuned for Part Two, in which we discuss the completely insane story, the level design, the boss fights, and whether or not the game is actually scary!

One thought on “The Evil Within”