How do you solve a problem like Maria? Or, in this case, how do you make an epic Minecraft wizard tower even more awesome? Build a giant wall around it! Exclusivity is the new black.

After Mindy chopped a wizard tower/castle into existence out of a mountain, there were two problems: what do we do next, and what the hell are we going to do with six chests full of cobblestone? The giant wall project was Dixon’s brain child. It was dozens of blocks above the water, the same level as the castle plateau, so that we could eventually connect it via long bridges to the castle (this part did not happen).

As the wall progressed, we wondered, what if we build giant housing/storage/shop areas INSIDE of the wall. This was one of two sections completed, but is by far the more impressive of the two. The remaining 10-15 sections were left untouched after we realized how much time and supplies this kind of thing required. Note the giant pillars to the left, which are a land-based continuation of the sea wall.

This is the other section that was completed, on the opposite end of the wall. This included a plateau level bridge that went through the mountain and connected to the castle. While in the Wizard Tower post I showed the enormous bridge that ended up with a staircase to a nether portal, that was eventually removed after the portal was migrated inside of the castle. The bridge was extended and bored through a mountain with two exits. One exit leading to the above bridge, the other to Castle West. Castle West will be featured in an upcoming post, so stay tuned! 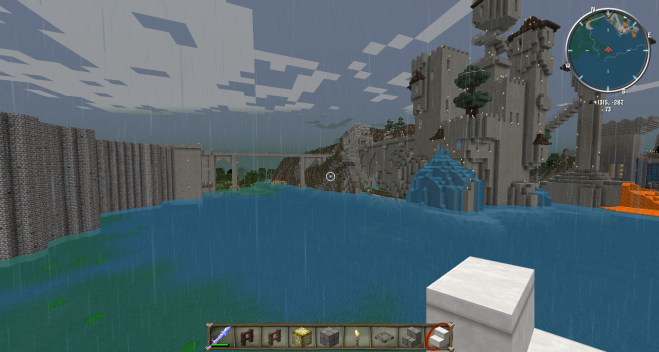 If you look real closely, you can see the bridge modifications in this picture, where it leads into the mountain instead of a staircase.

Back on the other end of the seawall, the land pillar/towers are really starting to take shape. The left tower was sculpted out of another hillside, which also holds a sheep pen. At this point you can see there is still a small amount of land mass in the foreground (the silly sheep is standing on it!). This was eventually removed to create a huge waterfall emptying into the already existing cavern that just so happened to be there.

This is the completed project, with a few interesting things to note: